Born on July 4, 1938, I was a poor, shy, very introverted girl on a Kansas farm. In my early years my parents attended a Quaker church and then later a Methodist church. The only thing I knew about Baptists was that they believed once saved always saved. There was a small Bible church in our community and I always attended any special meetings with my cousins. Every time I would hear a Gospel message and an invitation was given I would go forward and ask the Lord to save me. But no one ever showed me how I could know I was saved. So every night before going to sleep I would ask the Lord to save me again. I remember one night I couldn’t sleep and I promised the Lord if He would save me I would go to the mission field or do whatever He wanted me to do.

As a teenage girl my heart’s desire was to marry a preacher, but the only contact I had was with young men studying in the modernistic Methodist college who came to preach at our church. During my last year of high school a friend told me about Bob Jones University and I immediately wanted to go there to study. When I asked my father about it, the answer was “no way.” He said I had to attend either the Methodist college where he graduated or go to the Quaker University in Wichita, Kansas. Praise the Lord He was interested in a young, insignificant, introverted girl and He was in charge of my life and future and not my father.

I think many of you are acquainted with Wally Higgins from Northwest Baptist Mission among the Mormons in Utah. He was from my home town and was now pastoring the little church that my father didn’t like. A few months after my father told me I couldn’t go to Bob Jones University, Wally had a revival meeting and invited Richard to come and play the organ for the meetings. As a result we met and were married nine months later. The Lord gave me a ready-made preacher who had already graduated from Bob Jones University and had established Temple Baptist Church in El Dorado, Kansas. While we were dating, Richard showed me that I could know I was saved and I finally had that blessed peace and assurance of knowing that I was a child of the King and would someday spend eternity with Him. 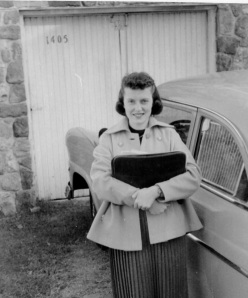 Kathleen the Bible college student while I was traveling on deputation

I am 6 years younger than Richard and had no Bible training, so he resigned his church so that I could go to college, and he did deputation while I studied. Two and a half years later I graduated from Baptist Bible College.

Immediately after my graduation we left for Lebanon arriving in 1959. We served in a predominantly Moslem city in North Lebanon. Since we had heard that many missionaries reached through interpreters, we had determined that we would learn Arabic. Richard is one of the few fundamental missionaries that preaches fluently in Arabic. When he first started preaching in Arabic, he wrote out his messages word for word and then would go over them time and time again. Melody was a baby then and he would often lay her on his lap and practice his sermons on her. That must be one reason she loves Arabic so much.

Work among the Moslems and Catholics is slow but the Lord gave fruit and we were able to build a church in Tripoli and a camp/conference facility high up in the Lebanese mountains near the famous cedars of Lebanon. Our plans were to stay there and serve as long as we could, but the civil war began and seemed to destroy our plans for ministry and future.

After a machine gun attack on his car one night and almost being kidnapped by a Moslem in Tripoli, Richard finally decided we should leave for the safety of the girls and me. So Christmas of 1975 was a sad time for us as we left Lebanon. We thought everything would clear up in a few months and that we would return, but it didn’t happen.

Through the years we had known many Lebanese who had immigrated to Australia, so we made application to go there. In 1976 we arrived in Australia. Richard had been having health problems by then and didn’t know if he could start all over again from scratch or not. But the Lord blessed abundantly and a new church was planted in Sydney among the Arabic speaking immigrants including people not only from Lebanon but Syria, Jordan, Egypt, Kuwait, and Iraq. We also teach in the Sydney Baptist Bible College and have a ministry among the Australian young people going out to start new churches. So the Lord took the tragedy and losses (we lost almost everything we had there) of Lebanon to give us a better, wider and more fruitful ministry in Australia.