It began early in 2012 with the commitment of Missionary Marvin Robertson of Spain to head up the project. The New Testament book was printed in August 2015 and the Old Testament book should be ready for printing early in 2016. It was a big job for the team who were dedicated to an accurate, high-quality translation and production. Nothing was spared to this end. The head translator spent 180 hours in the final proofing of the book.

The USA printing is now available in several US book stores or churches, some of which are on the Mexico/US border. Five hundred copies were put into a container going to Nicaragua and are now available in a bookstore there.

The Spain printing is now being distributed from a church outside Madrid. The Argentina printing will hopefully occur in October. Pray about a possible printing inside Mexico and also in Colombia. Nepal has started and there is talk in Burma. We never dreamed of all this! 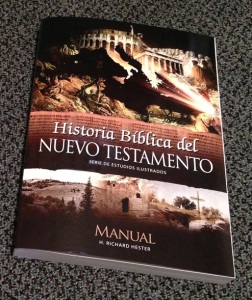 When Our Efforts Fail, God Begins to Work!

I tried several times to make contact with a particular Bible college in Mexico that I thought might have some interest in using our New Testament Bible History book. Every attempt I made failed and I thought it was not worth any more effort.

When I sent out a form letter announcing the printing of the book, I received a letter from the academic dean of this same college. He told me that he was visiting friends in Spain and saw the lady of the house translating a book into Spanish. He looked through the book and really liked it, thinking that it would be great for their Bible college! As it happened, the lady was our chief translator. She told me later that she attended this Bible college when she was a young lady even before this academic dean was born!

Other similar incidents have happened, all to demonstrate that we serve a wonderful, Almighty God Who delights to put His treasure into earthen vessels but Who wants us to know that the excellency of the power is not of us but of Him! My focus was on a city in Mexico but God rerouted the project through Spain. How often God reroutes our hopes for deliverance through unexpected “foreign” sources and circumstances.

Our beloved pastor told me he was going to head a project team to translate our New Testament book into Arabic! They are now up to Matthew in chapter four! That is precious to us; we are truly counting our blessings!